If you’re serious about basketball or player safety, one of the things that has to be considered if you have your own basketball court is putting down some type of surface that’s better than concrete.  Concrete tears up your basketball, is hard on your knees, and can cause injuries when falling on it.  Sport tiles are one of the best ways to solve that problem.  When I was faced with this problem a year ago, I did a lot of research into what I could do to make my court safer and better to play on.  Read on for my VersaCourt review.

And please, if you do purchase Versacourt later on in part because of my review, I would really appreciate it if you mentioned me as a referral.  In fact, as thank you for anyone who does, I’ll buy you a Wilson Evolution Basketball for your new court, my favorite ball that I reviewed here.  Just email me at at93850@yahoo.com and I’ll get the ball shipped to you.  Feel free to email me any questions as well, I try and help people out when I can.

Finally I started looking at outdoor tiles.  I looked at several vendors, including probably the most popular ones at sportcourt.  The problem with sportcourt is that they don’t allow you to install the tiles yourself so the cost is a lot higher.   Their product is nice however.  Versacourt was the one I ended up picking after getting samples from them, the outdoor speed tile was perfect for my building.  There’s also an outdoor game tile that would have worked but I didn’t go with it because:

a)  it was much more abrasive when falling on it

b)  since my tile was indoor, I didn’t have to worry about water (outdoor game tile isn’t nearly as slick as outdoor speed tile when water is on it).

c)  outdoor game tile has a lot bigger spaces on it, so it’s a lot easier for bugs/dirt to get underneath it plus things don’t roll very good on it.

d)  I was afraid outdoor game would tear up good basketballs, but I have since confirmed that it doesn’t.

Outdoor speed tile’s main disadvantage is that it can be a little slippery when wet.  That doesn’t really come into play much except for when it’s raining outside and you run into my shed, then you have to watch your step a little.  A simple floor mat would fix that issue pretty easily though.

I order the court to be big enough to cover my entire 36 x 44 building.  When it was delivered, it came on 2 big pallets in 4 x 4 preassembled squares of tiles.  That made things a lot easier, instead of having to assemble 2280 tiles individually, I only had to assemble 140.  They had a nice map of how to assemble each numbered piece starting in one corner.  Unfortunately for me, it wasn’t that simple. 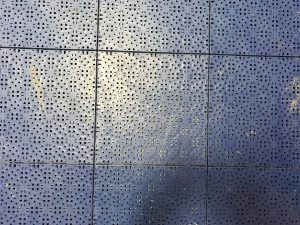 When I started installing the court, I noticed that the free throw line didn’t look quite accurate.  I measured, and it was 2″ off from what it should have been from the wall.  I then noticed a lot of my other measurements to the walls were also off.  That’s when I discovered that the tiles are only 9 and 7/8 inches instead of 10 inches.  So a free throw line at 15 feet away ends up being like 2 inches shorter than I was expecting.  I think for most people that have outdoor courts this isn’t a big deal, they just move the court slightly because they’re planning on having exposed concrete edges anyways.  For myself though, who wanted it flush with the wall, it wasn’t going to work.

In order to get it correct, I basically hooked up the tile until I was running the entire 44′ except for the edges, and then about 1/3 of the 36′, enough so I could see the lane (Note that when you hook this much together, it becomes very hard to slide).  Once I could see the lane, I measured against the goal to get it centered perfectly in my gym.  I then installed temporary spacers of the correct width (about 2″) in order to get my free throw line the correct distance away from the goal.  Luckily on my 44′ wall I was supposed to have to cut tiles to fit, but since the tiles were smaller than I thought that wall ended up being flush.

I was then able to install all the tiles around the rest of the shed expect for where the tiles didn’t lay flush.  In those places, I had to start cutting tiles in order to fill in the gaps.  Luckily, the tiles are easy to cut, I just used a standard portable circular saw to do all the cutting (and a 4 ft T-square to draw the lines to cut).

Once all the tiles were cut and installed, the court was basically finished.  It was a huge upgrade over the concrete I had there before and it honestly made my knees feel better playing on it.  Plus it looks fantastic in comparison.

How well does Versacourt hold up?  Well good enough that you can park your car on it two years after installation.  I added this section into the initial review to show both a picture and video of this:

The one thing that everyone is interested in is, how much does it cost?  To cover my 36 x 44 shed floor, it cost around $6200 to do it.  That’s around $3.90 a square foot.  That was for speed outdoor, I believe the game outdoor tile is slightly cheaper.   That included the shipping which was about $600 of the total plus the painting of lines on the court.  We had debated about doing a logo but that was an additional $700 at the time if I remember correctly.  As a result, we decided not to put in an Oklahoma City Thunder on our court for now.  It’s something you could add later as long as your tiles don’t fade too much.

About the only other thing you might want to consider are the ramp edges if you need them.  On the sides of the court, you can buy 2″ ramp edges that help you not trip when you first step onto the court.  I only used them near my 3 garage doors, other than that I just went flush with the wall.  Note the tiles do expand and contract some during the different seasons, so you may want to take that into account.  I would say that for me I notice about 1/2 difference between summer and winter over 44′.

Now that I’ve had six months to use it, would I do it again?  Absolutely.  While installing it was kind of a pain due to the 10″ vs 9 7/8″ thing, as long as you know that ahead of time and can move your court to adjust the free throw line properly, it shouldn’t be a big issue.  It’s actually hard for me to imagine not playing on it now.  I hope you’ve enjoyed this VersaCourt review.

If you have any questions or comments, please email me at at93850@yahoo.com

I’ve answered quite a few personal emails and would be more than happy to help.  I’m also going to try and get some videos up to try and help.  If this review has helped you make a decision, I would really appreciate it if you told them that Aaron Taylor referred you because that would really help me out.

I have another post describing all the other tiles Versacourt makes.  You can see it here:

I’ve also recently made a video, my 2 year review of Versacourt:

I’ve gotten some questions through email that I thought I’d include here as well, in case other people had the same questions.

What is your experience with the grip you have on the floor?

The grip is very good, similar to a wood floor in a gym.  Maybe slightly better.

When you slide on the floor does it leave any marks on your body or is it uncomfortable? (especially compared to a normal indoor floor)

I’ve never fallen on it, but it doesn’t tear up a basketball like concrete, and isn’t rough to the touch.  Probably slightly more rough than a wood floor.
The outdoor game tile though will scratch you up pretty good.  I have the speed outdoor tile (which you’re probably saying, isn’t the shed indoors?  It is, but it isn’t heated 100% of the time, so this tile was a better choice for my situation).

You mentioned in your review that the floor gets slippery when wet. Do sweat marks also make the floor slippery and does it dry easily/rapidly?

Same as a wood floor in that regard.  Sweat isn’t a problem unless you get a big pile of it in one place (which I’ve never had happen).  Mainly when I notice the slickness is when we come into the shed after it’s been raining or snowing out, you have to stomp out your shoes/dry them off a little before playing.
The outdoor game tile has way more grip and doesn’t have the water issues as bad, FYI.

Do you have a lot of dirt/sand under the tiles and do you clean them often?

No problems with dirt, the holes are so small that not much would get down there.  I use a big gym mop occasionally to sweep, I also put a roomba to work in it once, lol.

Basically everything.  It’s easy on the joints, doesn’t tear up basketballs, looks fantastic.  Every time people come over their amazed by it.
What do you dislike most about this floor?
I would say the install process and their slightly too small tiles (9.875″ instead of 10″).  If you have two basketball goals that can’t be shifted at all and you’re trying to get all the lines in the right spot, it’s going to be a challenge.  I had to move my court around 2 inches away from the scoreboard wall so the free throw line would be in the correct space.  The math proves that out as well, you need 15′ (180″)  between the goal and the free throw line.  180″ / 10″ = 18 tiles * .125″ = 2.25″ short.  Luckily I was able to move it some to make it work, but others may not be so lucky.
Making a 1/2 court work would be easy, it’s the full court where your measurements have to be exact.

What is the Versacourt cost per square foot?

I mentioned it above, but for Speed outdoor my order was around $3.90 per square foot in the spring of 2017.  I believe Game outdoor is slightly cheaper.  If you contact them, they’ll be more than happy to give you a quote.

How is Versacourt compared to Sport Court?

Well luckily I’ve actually played on an outdoor Sport Court, in fact I even thought about going with them to start.  As far as playing on them, speed outdoor vs the sport court powergame, they play almost identical.  I would say that the powergame is probably better under wet conditions, but Versacourt is better where you’d have a lot of dust/dirt (due to the large powergame holes).  I don’t think you could go wrong with either, I think that Versacourt is more for the DIY guy who wants to put in a court and Sport Court is more for someone who just wants to pay have it done without touching it.  Sport Court is only professionally installed so you’ll definitely pay a lot more for it.

Can you use a shooting machine on it?

Heating and Humidity for your Basketball Court

Dribbling glasses review, worth the money?